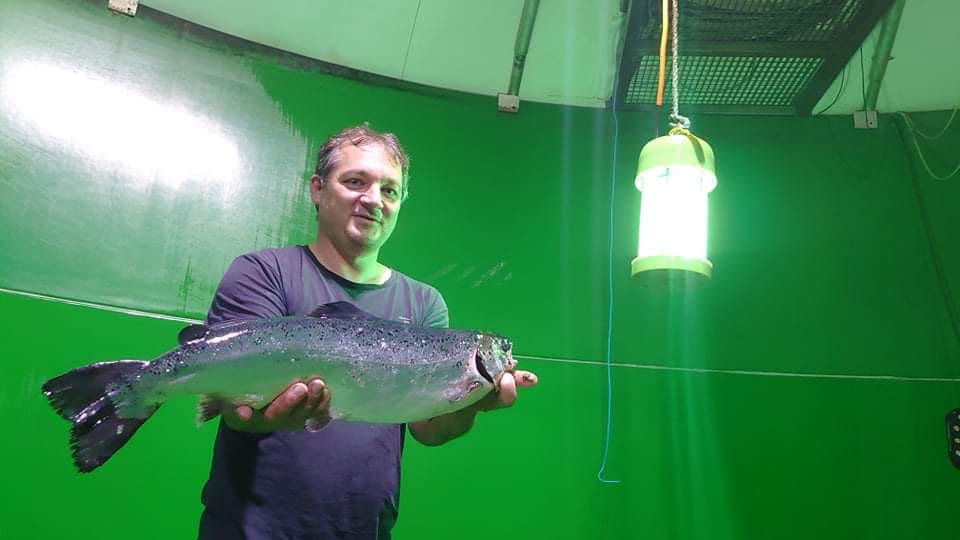 By arranging underwater lights in a pentagon, smolt producer BioFish has succeeded in optimising the distribution of post-smolt in the tanks. Combined with a new feeding strategy, the result is higher growth of the fish.

A larger average weight and improved fish welfare is the outcome of the new arrangement of underwater chandeliers. A new light pattern has been successfully tested on a separate flow tank this winter. During low temperatures a more even distribution of the fish in the tank was achieved with almost total absence of previously experienced fin wear due to cold temperatures. BioFish will therefore make use of the same set up for all new fish groups, also from the parr stage.

“The fact that growth can be so extremely variable in a fish group has often puzzled me. We know fry are dominant to ensure their own survival. That is obviously why we have to grade fish. There is plenty of food, so what are the mechanisms?” asked Ole Fredrik Skulstad, general manager of BioFish, in a press release.

Skulstad has doctorated in the use of light in cod farming and has now worked out a completely new lighting setup in the tanks at the smolt plant in Hardanger, Western Norway. By spreading the light evenly throughout the tank volume, Skulstad has managed to distribute the fish in the tanks to a far greater extent than before.

“You may say we have placed five small suns, in the formation like the dots on a die, under water. As the light does not come from above, no fish will overshadow another. Rank and dominance are reduced and the fish become less stressed and less competitive. The level of welfare increases at the individual level and the fish typically stays a little more away from the surface,” said Skulstad.

The solution is small LED chandeliers that scatter the light almost in a sphere. The light flows in all directions in a formation of 360 degrees.

“These chandeliers are well suited. They appear to have a wavelength that has a positive effect on the fish. They come in 600 watts and are supplied by Bio Marine. To offer all individual fish sufficient light, is in line with our policy,” emphasized Skulstad, who pointed out that in chicken farming it is a well-known move to facilitate the dissolution of the hierarchy. While with beef cattle, it is known that animals with horns block others to get to the feed box.

“We feel this is so exciting that we are happy to share it with others,” said Skulstad.

Tax refund
Other measures that have been taken under the BioFish concept are to use natural astaxanthin in the early stages of life. In a collaborative project with researchers in Tennessee, funded by tax refund, we have seen that natural astaxanthin acts as a natural antioxidant and provides steady growth, good coloration and high survival on the fish. Research shows that natural astaxanthin is an important “vitamin” for the fish, and when we know this we must give the fish the most natural starting point possible.