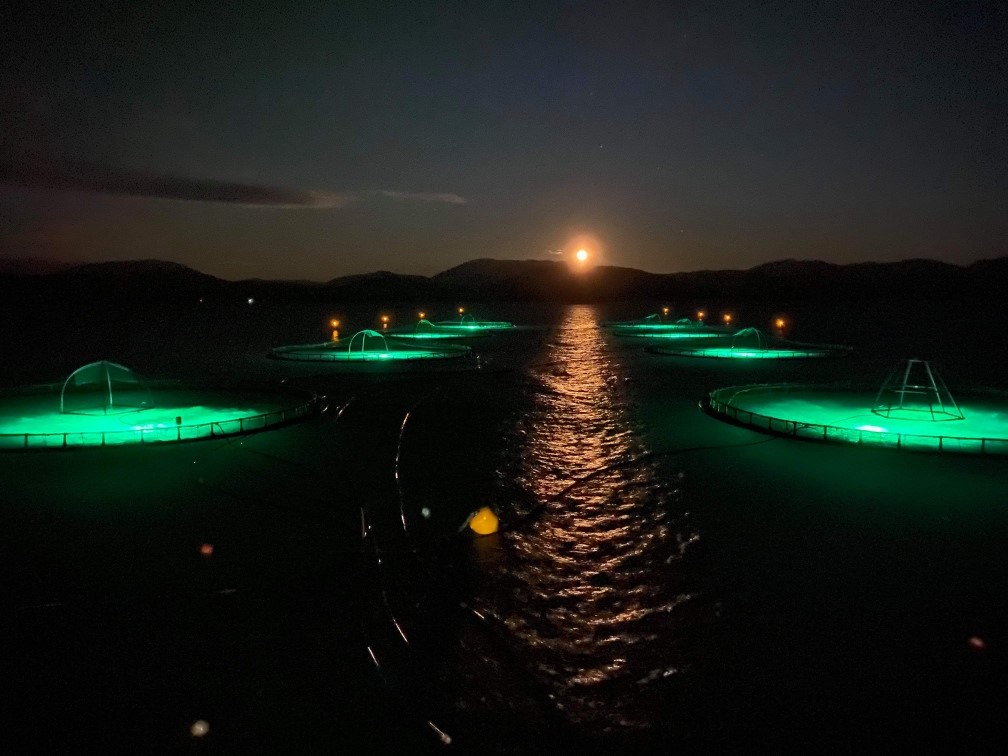 One light per cage in salmon farming

By reducing the number of light points in the cages, Nordlaks Oppdrett has less operational challenges, such as when the fish stock is treated against sea lice. A year ago, testing of only one light source in large cages of up to 160 m circumference began.

Underwater lights in the cages represent a ‘foreign element’, which means extra work in connection with, for example, parasite treatment, grading and moving fish. The light must be dismantled before and put back after the work.

- Having more lamps is a waste and a burden in connection with the operation. We have therefore tried many different types of light and we have constantly been looking for powerful lamps to get as few light points as possible, says production manager Tommy Hansen at Nordlaks Oppdrett in a press release.

Almost a year ago, they started using the strongest light source available on the market, a 2,500 W LED fixture hanging in the middle of the cage. Previously, you had to use up to four lamps to achieve the same effect.

- We have now used the one-light solution on fish released in autumn, which thus received light during their first winter in the sea. As is well known, the fish must be of a certain size to be at risk of sexual maturation. The results have been good. Now we also run fish that are released in spring, and we expect this to go just as well. Larger smolts that are released in spring and grow ready for slaughter during the following summer do not need light supplements, explains Hansen, who illuminates about twenty cages so far with the new strong light. The condition of the fish is carefully observed.

- For us, it is ultimately about percentage shares of the quality classes superior, ordinary and production fish. Of course, we want the highest possible proportion of superior, while sexually mature fish is classified as production. Production fish must be processed by yourself and can only be sold domestically. We can clearly see from the fish quality that the effect on sexual maturation of only one light per cage seems to be at least as good as compared with several LED lights.  It also seems that a light in the center of the cage suits the fish well, it orients itself well to the light, says Hansen.

- The feedback from the localities is very good, the lighting system is easy to use, the lights are robust and, as I said, give a good effect in relation to sexual maturation and growth. We had a complaint about a light that went out, but the supplier replaced this without discussion within a few days, so we have to be satisfied with that, concludes Hansen.