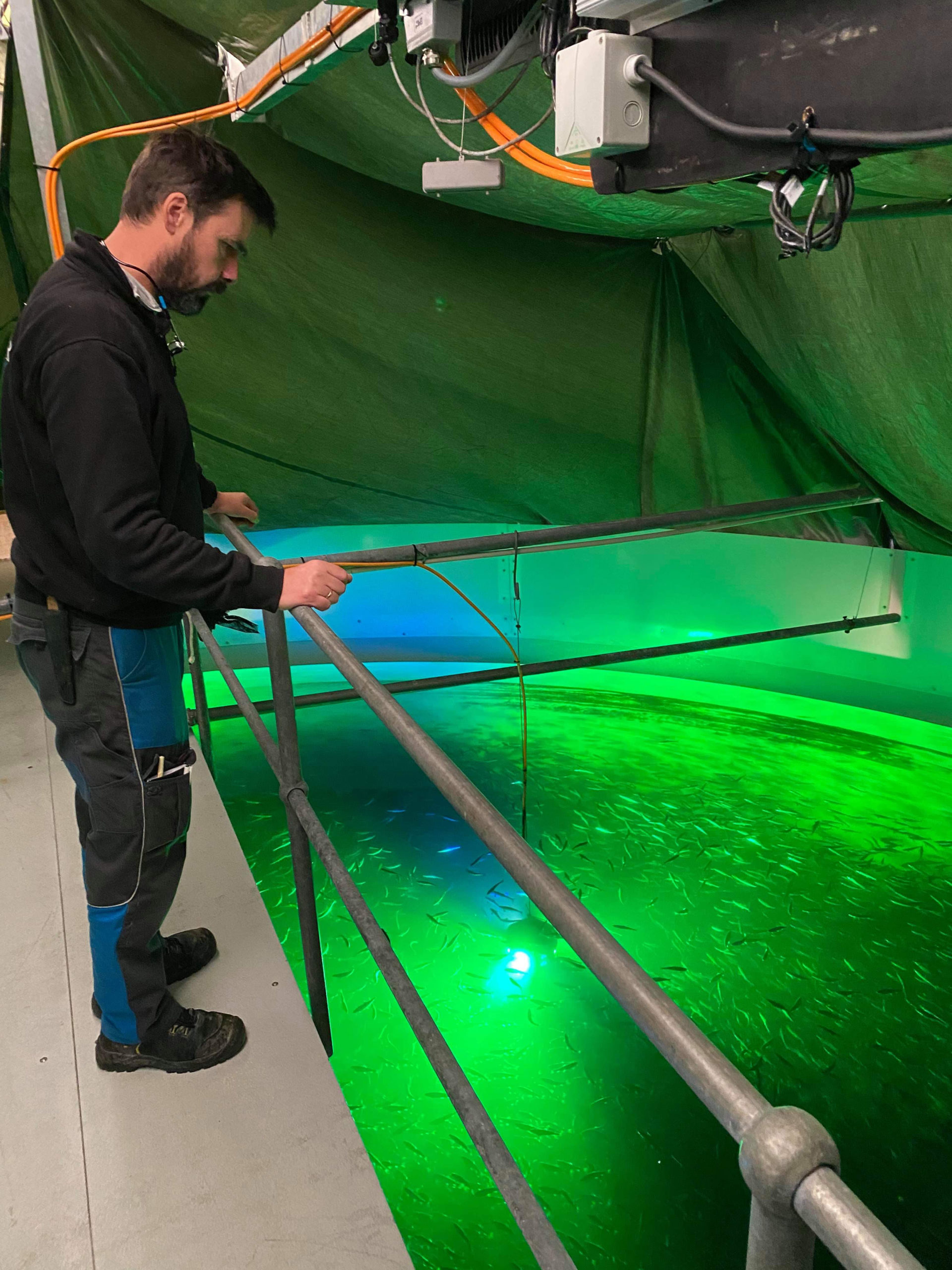 For both fish welfare and for keeping visual contact with the fish, smolt farm Trøndersmolt chooses to continue with full underwater lighting to smolts with record-breaking growth. After testing different brands, they landed on two to three simple LED crowns in each tank.

Trøndersmolt produces smolt in Åfjord municipality with a capacity of up to 4 million per year. The fish is delivered to local fish farms such as Refsnes salmon and Måsøval Fish Farming. Thanks to two large and efficient water-to-water heat pumps, high water temperatures with a low energy consumption is maintained. The plant is of the RAS type and is operated with low water consumption and a high degree of purification.

The fish grow formidable in the farm, Trøndersmolt delivers a fish that weighs 220-250 grams on average within 48 weeks from the time the eggs are hatched.

After trying different solutions of underwater lights, the farm now moves on with lights in the tanks, by installing chandeliers in all the tubs in the facility.

- We believe light has a beneficial effect on fish welfare. With three meters deep tanks filled with fish, it is a challenge to maintain good visual contact with the fish. We have experienced that light makes it easier for us to see that everything is in order in the tanks. With underwater light, we get to illuminate the tub in a different way than with light from above, says general manager Bent-Are Ratvik.
To ensure enough light, two chandeliers of 600 watt are installed in all 10-meter tanks and three chandeliers in the 12-meter tanks in the farm. The farm consists of two twelve-meter vessels and six ten-meter vessels that are used for both smolt and pre-smolt. In the pre-smolt period, light is used around the clock, while after vaccination, the fish are stimulated to smoltify by using a fixed day-night light rhythm, which is twelve hours light and dark at 400 degree days. The new underwater light has been used together with existing lighting for a long period of time. It has a soft start function which gives the fish a smooth transition.
- The light under water is run synchronously with the light over the tank, so that we get the full light effect until smoltification, Ratvik says. According to Ratvik, the actual color of the light does not seem to play a decisive role. The LED luminaires are operated with 12 volts. The inverter is built into the crown itself, which makes installation easy. The light is Aqualux from Bio Marine.
- We have not yet been able to connect the underwater light to the light control yet, so it will be to turn the light on and off manually during stimulation to smolt, but it is something we want to look into, says Ratvik.

According to Ratvik, even if you use RAS technology, the water is not significantly more coloured than it usually is in flow-through systems with a hint of humus. - In my opinion, we have fairly clear water in the plant, especially after we put more focus on the particle filters, as well as frequent rinsing of biofilters. However, I feel that light underwater gives us better control over both fish health and welfare, which can result in good growth and low mortality. Fish in nature get a lot of light for free, so it should probably also get it in farming, it seems that the fish thrive well with this underwater light, says Ratvik.