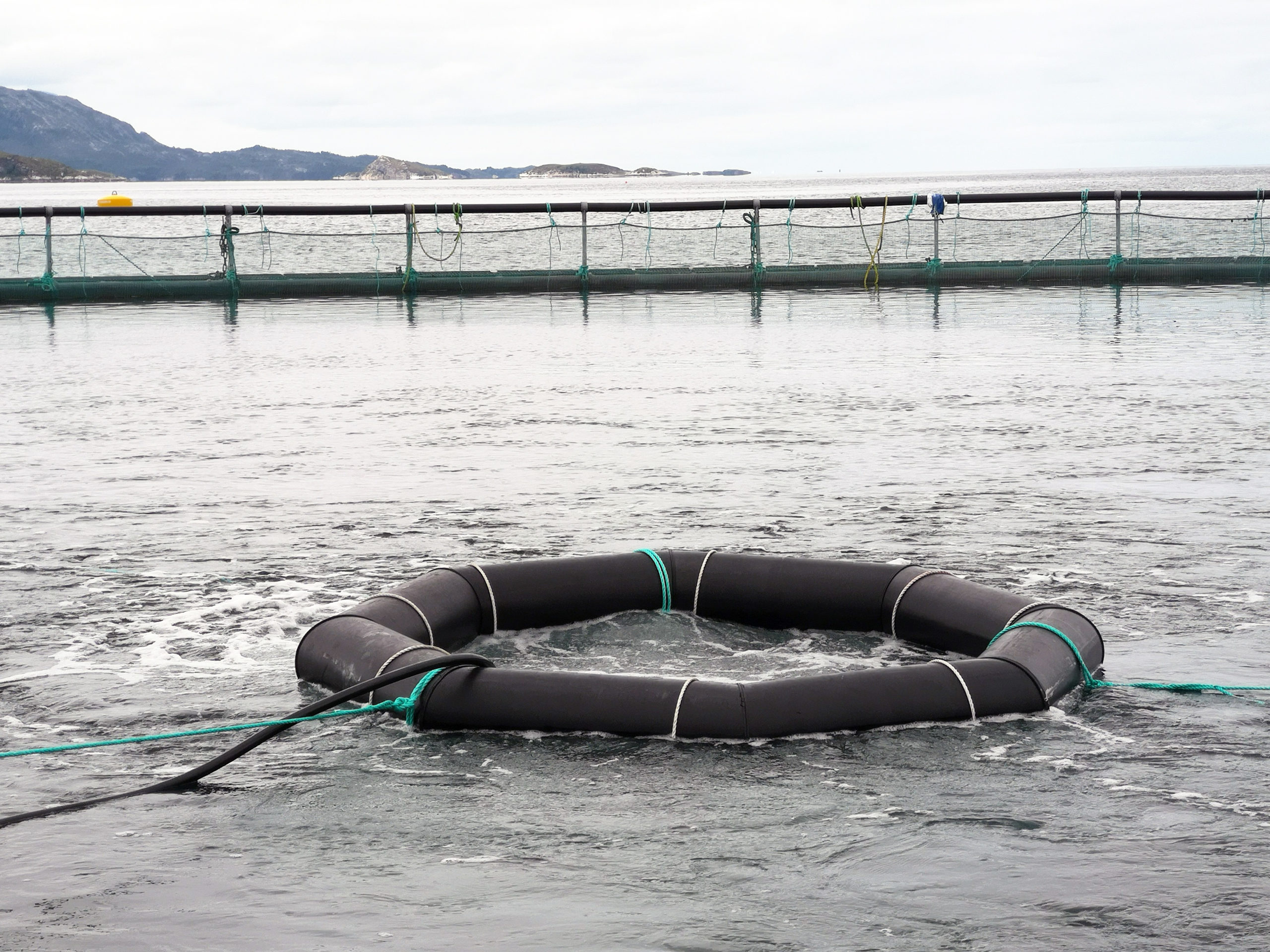 Cages with deep lice skirts can achieve as good a growth environment as in open cages. Recent full-scale experiments with lifting deep water based on compressed air show that a good cage environment can be maintained, even when using lice skirts.

Lice skirts reduce the onset of lice and parasites, but have also been shown to constrain water exchange in sea cages. According to the company Oxyvision, it has now been proven that Turbolift ensures a more comprehensive and efficient replacement of the water masses behind the lice skirt.

To document the effect of lifting large quantities of deep water with the Turbolift, a full operation test was carried out from October 2019 to January this year at a fish farm in the western part of the northernmost county Finnmark in Norway.

More stable oxygen levels
The plant initially used deep lice skirts to ten meters deep, but as a result of reduced oxygen content in the cages the skirts were removed. In one cage, however the skirt was retained and water from 15 m depth was moved into the upper cage layer by Turbolift.  All the cages were stocked large salmon before harvest at normal fish density.

The oxygen level at five and ten m depths was measured several times a day in all cages throughout the three-month period. The monitoring indicated a stable high oxygen concentration in the cage applied lice skirt and Turbolift during the entire period. Only exceptionally, concentrations below 7 mg / l at a few m depth (see the figure below) were measured. Furthermore, the oxygen concentration was at the same level as in the other cages - without skirts and Turbolift.

- In general, the oxygen concentration was more stable in the TurboLift cage than in several of the reference cages, where occasional oxygen drops in the range 4-6 mg/l were observed. This is partly due to the fact that the natural flow conditions in the sea vary, says research leader Asbjørn Bergheim at OxyVision.

- The trial is promising

In the skirt and Turbolift cage mortality rates were very low (<0.8 per cent) throughout the period and actually below the levels at the other cages. At the same time, the feed intake of fish in the test cage (with lice skirt) remained high and stable during the period, gradually decreasing from 0.6 %/day at 8 ֯C in October to 0.4 %/day at 4 ֯C in early January.

- This indicates good environmental conditions not affecting the fish's appetite. Feed intake was also consistently high in the other cages, however with larger fluctuations from one week to another compared to the cage with lice skirt and Turbolift, says Bergheim. The experiment is promising in several ways. It shows that it is possible to maintain good cage conditions even with deep lice skirts. One Turbolift supplied 500 L air/ minute per cage seems capable of ensuring optimum oxygen conditions and water exchange even in large cages applied lice skirts, concludes Bergheim.