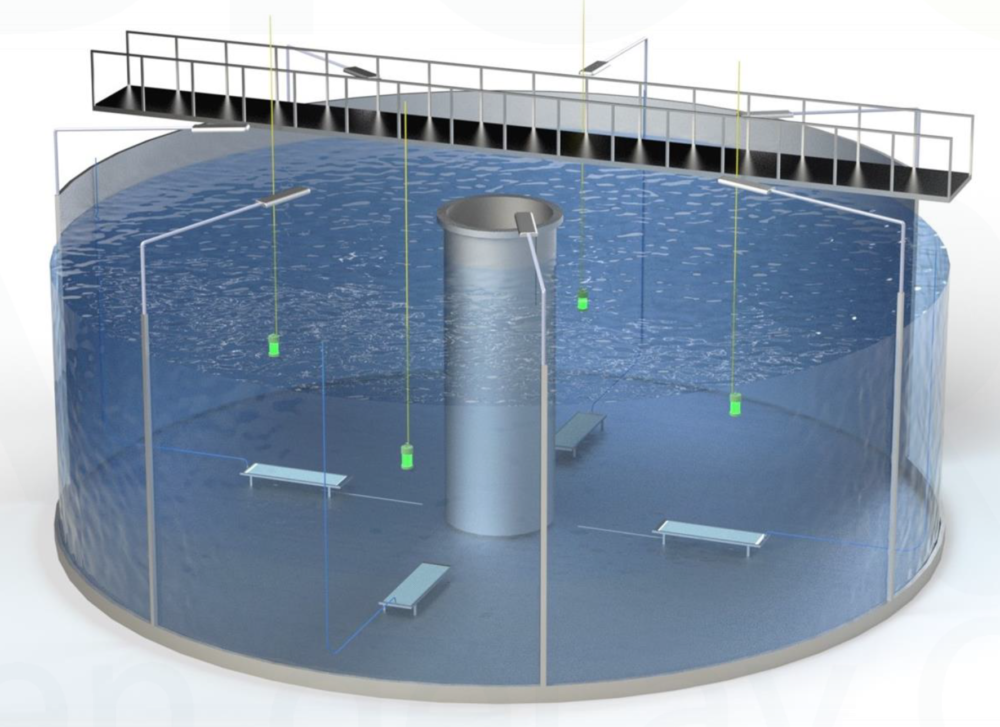 Modern onshore farms are operated with high fish density and low water consumption. Such productive systems are completely dependent on a continuous supply of oxygen to maintain a stable and favourable oxygen concentration (DO) that ensures good growth and welfare for the fish. The same applies to the production of salmon and trout in closed sea cages where water is pumped up from a deeper water layer and added oxygen.

In such systems dependent on the pumping of water and oxygen supply, a power outage could have serious consequences if it takes time before the power supply is restored. Occasionally, it has been experienced that emergency power generators in fish farms have not switched on automatically in connection with lightning and heavy rain.

If the normal oxygen supply stops due to power outage, there will be a gradual accumulation of carbon dioxide (CO2) in the tanks as the power-dependent aerator also stops working. For every mg of oxygen the fish consume, 1.1 - 1.2 mg of CO2 will be produced. Abnormally high CO2 concentrations in the water reduce the fish's ability to utilize available oxygen (the so-called Root effect).

At a fish density of 40 kg per m3 and 12 ˚C water temperature, the DO level is reduced to an unfavourable and critical level, i.e. to below 5 mg/l, less than one hour after the emergency situation arose, assuming normal oxygen consumption of 20 – 50 g pre-smolt. A sudden stop in the supply of water and oxygen could cause serious stress, which in turn will lead to several times higher oxygen consumption. Therefore, time is very short for extra oxygen supply to avoid mortality when crisis situations occur.

This is illustrated in Figure 1, which shows DO and CO2 concentrations in a tank stocked pre-smolt when emergency oxygenation is not provided. With routine oxygen consumption without stress, an unfavourable / critical DO level (< 5 mg/l) will therefore occur after approx. 40 minutes, while extreme stress can cause a corresponding reduction within 15 minutes and total oxygen deficiency after 25 minutes. The CO2 level in the water will continue to increase as long as the fish still breath and the theoretical curve (stress-metabolism) shows the expected CO2 concentration if the oxygen supply is re-established in time (see example, fig. 2). It is assumed that the concentrations of DO and CO2 decrease / increase linearly. The calculations are based on the following assumptions:

Figure 2 illustrates a situation where the oxygen supply is restored after 15 minutes so that the lowest oxygen level during the emergency is approx. 5 mg/l. It is assumed that the concentration of oxygen rises back to the initial level, 12 mg/l, after a few minutes.

Under these conditions, the fish tolerate 15-20 minutes without oxygen supply before a critical oxygen deficit occurs with the risk of damaging effects and increased mortality. When it comes to CO2 accumulation in the water due to power outage, the time period before major damage occurs is more uncertain. For long-term exposure, CO2 concentrations above 10-15 mg/l are not recommended, but the damaging effect of higher levels, e.g. over 50 mg/l lasting for a short period, there is little knowledge about. In any case, the fish will survive longer without removal of CO2 than with a lack of oxygen supply.

To achieve maximum safety against dangerous oxygen failure in the event of a power outage, the use of a pressure-based emergency system for oxygen supply that is independent of the power supply is recommended.

For routine supply of oxygen in fish tanks and floating enclosures it is recommended to use oxygen generators that reduces the operating costs.

Figure 1. Concentrations of oxygen and carbon dioxide in tanks stocked with pre-smolt during the first hour after a power outage without the addition of oxygen, assuming normal metabolism (top) and stress-metabolism (bottom). Prerequisites for calculation in text Figure 2. Concentration of oxygen in tanks stocked with pre-smolt during 30 minutes after a power outage when oxygen is added after 15 minutes.
Prerequisites in text (stress-metabolism)