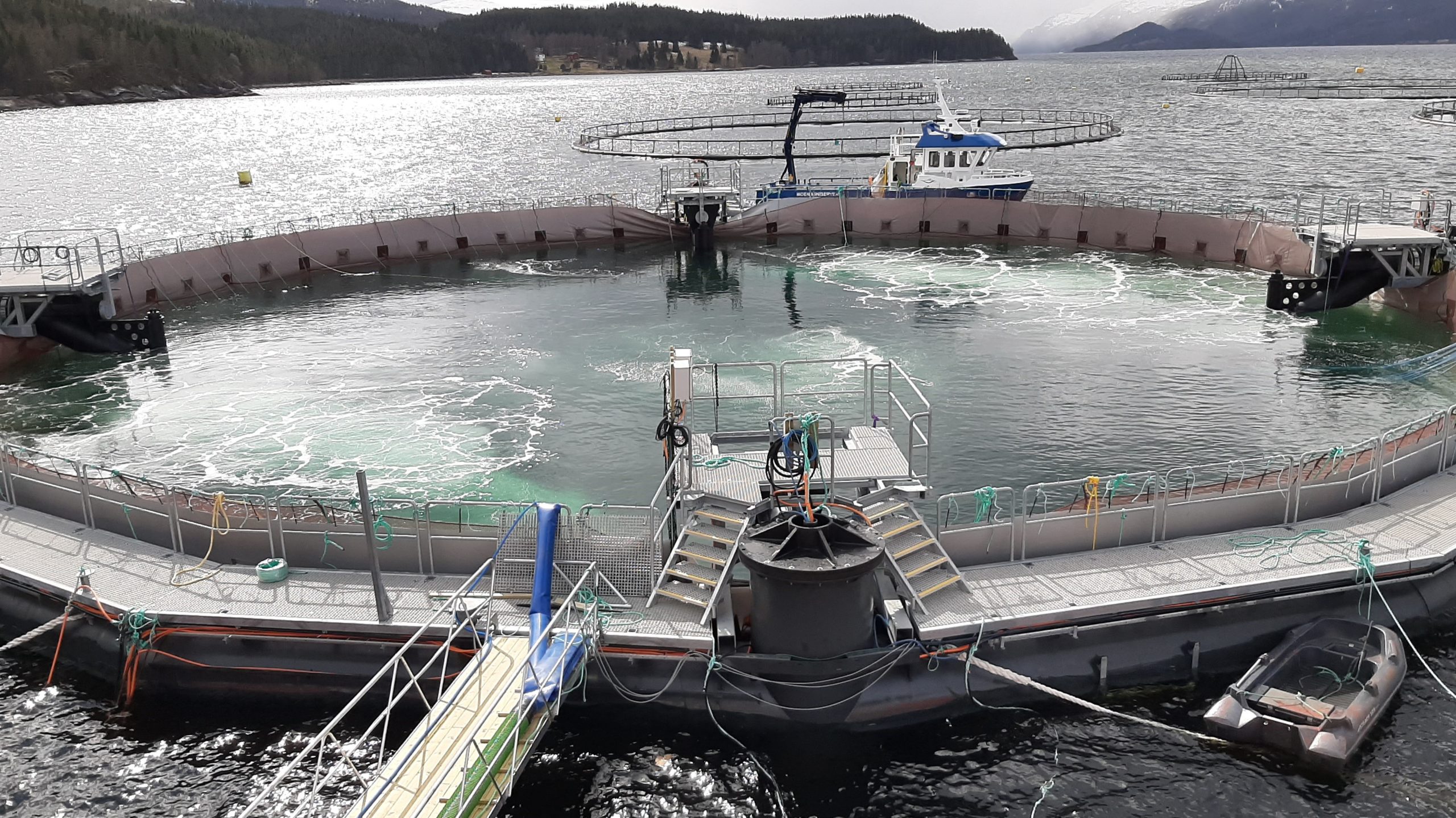 Effective addition and control of oxygen in closed cages

As described in another article, almost all the oxygen that salmon and trout consume in closed floating cages must be added. Most such farms that are in operation add oxygen only by means of diffuser-based systems.

The total oxygen demand in the production of salmon is stated at about 250 - 500 g per kg of fish produced. In a closed cage with an annual production of 300 tonnes, the need for oxygen addition is therefore a minimum of 100 - 150 tonnes of O2 per. year, or up to 1500 tonnes of O2 per year in a farm with 10 such cages and a total production volume of 50,000 m3. The mixing efficiency for added oxygen and control of the oxygen dosage is of great importance both to avoid unnecessary waste of oxygen, and not least to ensure optimal environmental conditions for the fish so that welfare and growth potential are maintained. In addition to feed, oxygen represents the most important input factor in closed systems.

It is crucial for growth, feed utilization and welfare for fish in aquaculture that the oxygen level is kept even and high. According to Wedemeyer, the oxygen saturation for farmed fish must be 71 - 81% at 5 - 15 ˚C, but studies indicate that this level is too low to achieve maximum growth in Atlantic salmon. By comparing several studies, Thorarensen & Farrell found that oxygen levels must approach full saturation (100%) to achieve maximum growth rate in Atlantic salmon. Crampton et al. (2003) observed that both feed utilization and growth rate in post-smolt increased with increasing oxygen levels from 80% to 100% at moderate temperature (7 - 10 ˚C). On the other hand, it has also been found that the lower level for maintaining maximum feed intake for post-smolt in salmon is about 70% of saturation at elevated temperature (16 ˚C).

Short-term, moderate decreases in oxygen levels in salmon cages to 50-70% of saturation should be avoided with a view to maximum growth and feed intake, even if a certain compensatory increase is observed under subsequent favourable oxygen conditions.

Also in open cages, there may be a need for oxygen addition during periods of elevated temperature and low oxygen levels at night. Raising the oxygen concentration by 10 - 15% using diffuser networks in salmon cages through September-October 2003 at 15 ˚C water temperature resulted in improved growth / feed utilization and reduced mortality, compared with in neighbouring cages without the addition of oxygen. It was concluded that the installation of oxygenation equipment at a medium-sized farm (2003: 500-1000 tonnes / year) at that time could mean an extra annual yield of approx. 1 million NOK per facilities.

As an indicative recommendation, it is proposed that the oxygen concentration in closed cages should be kept stable at 80 - 85% of saturation.

Oxygen dosing with diffuser and need for emergency system

In general, oxygenation systems must be designed in such a way that the supply is secured independently of probable accidents / malfunctions. The use of diffuser hoses as a redemption system does not require power supply as long as one has oxygen available. Normal redemption rate and efficiency are therefore maintained even if a power outage occurs in the system - in contrast to other technical solutions that require power supply to dissolve oxygen. Furthermore, it is of course important that the oxygen is carried to the diffuser hoses in the cages. This means that the dosing cabinet must also contain emergency functions with valves / rotameters that work in the event of a power failure.

In the event of an unforeseen stoppage of the oxygen supply in closed cages, it is important to have emergency systems that intervene in the event of unforeseen events. Typical events are power outages that cause oxygen production in the generators to stop. A possible technical failure in the emergency power system can in turn mean that oxygen production is still lacking and a back-up system should therefore also be available regardless of power. Such a system can e.g. be connection to compressed oxygen from standard packages with 12 -16 bottles with 200 to 300 bar pressure that can deliver a total of about 175 - 330 kg O2. This system can be switched on in the event of a pressure drop in the main oxygen source. At a back-up capacity of 330 kg oxygen and a biomass such as requires 50 kg O2 / hour, it will be sufficient for more than 6.5 hours of supply until the fault in the main supply has been rectified. If you need extra capacity on the back-up system, you can connect several bottle batteries.

As mentioned in the introduction, the annual oxygen consumption in a large farm with closed cages could be several thousand tonnes. At a production of 3000 tonnes / year, the fish's consumption will amount to 1000 - 1500 tonnes. Assuming 100% utilization, the need for oxygen supply will then correspond to the same level. Experience figures from commercial farms, however, show considerable variation in the amount added from approx. 0.5 to over 1 kg O2 / kg produced fish. Inaccurate dosing in relation to needs may lead to unfavourable fluctuations in the oxygen concentration in the cages with consequences for the fish's growth and welfare. Overdose leads to oxygen supersaturation in the water which means lost oxygen to air and increased production costs. Reduced redemption power and inaccurate dosing will also result in increased capacity requirements for production (generator) and storage capacity for oxygen (tanks).

The transfer efficiency of oxygen to the water mass in the cages depends on several factors, e.g. the density of holes in the diffuser hoses and the amount of oxygen supplied. This is exemplified in Figure 2 which shows the effect of four different densities of holes at two different levels of supplied air. Based on this test, it was concluded that the lowest number of holes gave the highest effect, while doubling the amount of air only increased the degree of transfer by 20-30%. When transferring pure oxygen to water with diffusers, the efficiency will depend on the same factors.

Aquaculture facilities in the sea have either liquid oxygen in a tank (LOX) or an oxygen generator to supply closed cages or cages with deep skirts. There is less investment in advance associated with the use of LOX as the storage tank, evaporator and often the supply line to the cages are rented from gas companies. In addition, cost is the foundation for the tank and the purchase of oxygen. An advantage of using LOX is the availability of large amounts of oxygen under special environmental conditions or stressful situations that lead to extraordinary consumption. Furthermore, the oxygen supply in the cages is not dependent on current as the pressure in the tank drives the gas to the diffusers. The disadvantage is the logistics of gas, which at sea presents challenges with regard to transport and storage at the site. At low oxygen consumption, the pressure builds up in the tank which is discharged via the safety valve, which leads to an estimated 2 - 4% loss per day during evaporation.

Use of an oxygen generator entails higher investment, but lower operating costs than the LOX system. Safety is ensured with a backup solution with compressed oxygen on the battery; in addition, it is common to build a system with more lines for increased safety and less wear. A container with three generators that together have a capacity of 99 kg O2 / hour then consumes approx. 75 KW power at maximum load. Such a setup has PLC control which connects the number of generators as needed for optimal energy consumption and safety. Such a container can be placed on the sea site, either on a raft or on its own barge.

The use of an oxygen generator seems to be a preferred solution for sea sites, especially those located some distance from land, rather than the use of liquid oxygen in a tank. It is assumed that simpler logistics and lower costs are the reason for this.