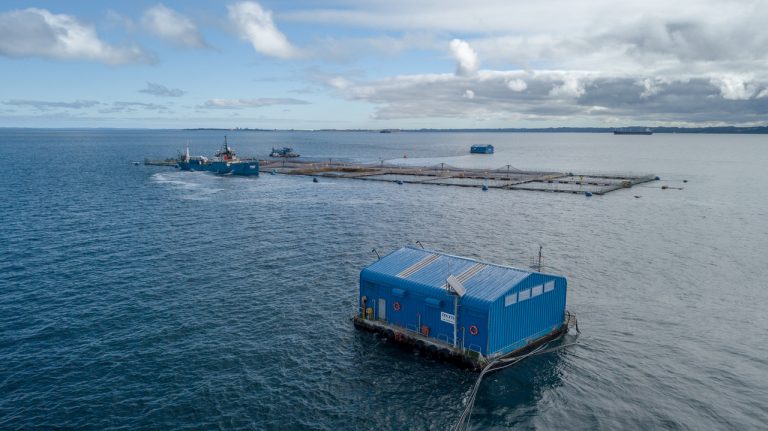 In South America, self-produced oxygen is widely in use and Norwegian diffuser technology is preferred. But so far it has not yet been common in Norway to add oxygen into fish cages since the water currents are strong and the sea is rich in oxygen.

In Chile, on the other hand, in recent years there has been a trend where oxygen production at the fish farm site has become increasingly common. New technology has become available and an increasing number of fish farms now produce oxygen on a fleet at the site. According to Oxzo, the company has installed systems from the X to XII Regions that, in total sum up an oxygen production capacity of 110 tons per day.

The company has in the past year delivered twelve fleets for oxygen production for sea farms, along with air supply and antibloom systems with diffusers for cages.

Complete unit to Norway
It is the use of lice skirts that have led the Chileans to show interest in the Norwegian market.

“We have learned about Norwegian salmon farming by working with the Norwegian company Bio Marine, and we have such expectations for the Norwegian market that we have brought a complete unit to Norway, we are sure that it will be operational in a short time,” says Marcus.

Bio Marine will market Oxzo’s oxygenation solution in Norway. A complete container for oxygen production will be displayed at Skansen during Aquanor, the world’s largest aquaculture technology exhibition in Trondheim, Norway.

“Good idea to oxygenate inside lice skirts”
The collaboration with Bio Marine started with testing out Norwegian diffusor in sea farms.

“Diffusers play a very important role in the efficiency of oxygen addition. In total, we have purchased more than fifty kilometres of diffuser hose from Norway, and we look forward to Aquanor and to put forward plans together with Bio Marine,” says Marcus.

“Chile is in front of the production and management of oxygen-additions for offshore farming. Oxo delivers complete automatic systems for oxygen and air with smart cage-level management, and with our Netox diffuser, which Chileans already use, we have a perfect match in technology” says Nils Hovden, head of marketing in Bio Marine, who looks forward to offering the industry complete oxygenation solutions.

Asbjørn Bergheim, head of research at the Norwegian company Oxyvision, is not surprised by the need for large-scale oxygen in Chile and reckons it is a good idea to oxygenate inside Norwegian lice skirts too.

“When using a skirt, low oxygen values during periods will lead to reduced growth, which will affect profitability. With skirts, growth time in the sea can be extended by up to 2 – 3 months, and efficiency is lost. I’m sure many salmon farms that use skirts would benefit greatly from oxygenating,” says Bergheim.